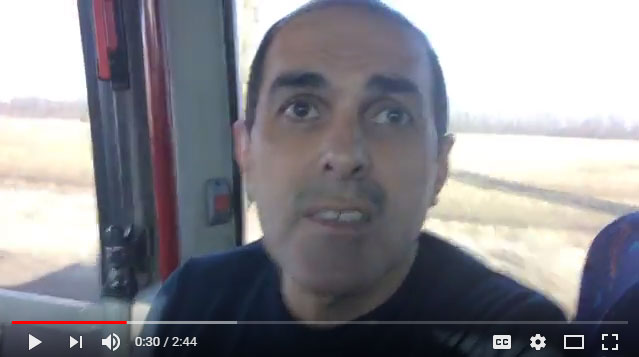 It was the second time and the second country in seven years that this young family of 6 was fleeing from.  And it was for the same reason – war.  First in Syria and now in Ukraine, the war had seemingly followed them.  I met and talked to a Syrian father named Amar and his 11-year-old son Yasser on a bus in Eastern Ukraine in March as they were fleeing from the town of Avdiivka, Ukraine (Avdiivka is a heavy battleground with some of the deadliest fighting in the War in Donbass).

This little-known and oft-forgotten war in Eastern Ukraine is known as the War in Donbass, taking place in the Donbass region of Ukraine between the pro-Russian separatists and the Ukrainian government.  This war began in March 2014 just a month after pro-Russian former Ukrainian President Viktor F. Yanukovych fled to Russia in February due to anti-government protests.  Shortly after that Russia quickly annexed Crimea devolving the country into a conflict between Russia supported separatists and mercenary fighters in Ukraine fighting against the Ukrainian Army.  You can read more in this The New York Times opinion article “The War No One Notices in Ukraine.”

Amar, the Syrian father I met, his Ukrainian mother and their four children fled Damascus, Syria seven years ago, leaving behind their home, their business, most of their belongings, and all their extended family and friends.

Ukraine was peaceful … or so they had thought. They never imagined that another war would soon break out in their new home.  Just as Amar and the family moved into his wife’s parents’ home, rebuilt their lives and started another business – they lost everything once again due to war.

I bought a home in Ukraine and a shop. We could live again.

And after that, the same happened as happened in Syria. I don’t know where we should go. If we go to another place, maybe another place will have war.

We are leaving because we are without heat, without water, sometimes without electricity, and everybody is afraid again.

I don’t know what will happen. But I ask God for something good after this.

Watch the interviews with Amar (above) and his 11-year-old son Yasser (below), as they are being evacuated.