Children who care for others are amazing; those who do so in extreme situations are extraordinary. I recently heard such an extraordinary story of a young former orphan helping other orphans.

Conditions were tough, with very few staff  – or beds. She was soon joined by her little sister (with cognitive and physical disabilities) and her little brother and had to care for them, too – fighting for one meal a day for the three of them.

The day began with chores at 4:00 a.m., and classes from 7:00 a.m. to 6:00 p.m. (with two 10-minute breaks). But the 2-month school holidays were harder; all the teachers, caretakers and cooks left, leaving one adult to guard the gate (Agnes felt he slept most of the time).

During the holidays, Agnes kept herself and her two siblings alive by eating mangos and trying to brew tea without many ingredients. It was especially hard in the dry season when there was often no water.

At 13, Agnes was “aged out” of the orphanage. She was allowed to return to look after her sister and brother during the holidays.

In Agnes’s new school she was forced to convert to another religion.

Then she was punished for wearing open sandals (as a girl), despite a medical condition in her foot that meant she shouldn’t wear shoes. The punishment was to be caned in the school’s central courtyard, in front of everybody – deeply humiliating for a teenage girl. 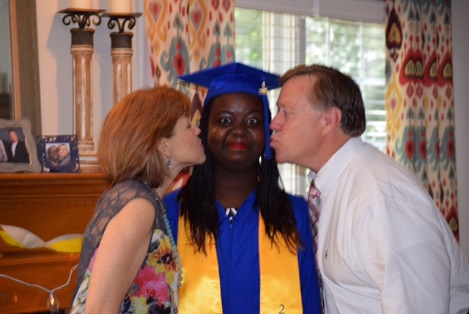 But Agnes and her family’s story doesn’t end there because they were eventually adopted by a caring Christian family.

The path hasn’t been easy, but Agnes is committed to giving all she can to her country of birth. She’s studying nursing, and now aged 21, she has established a non-profit to care for orphans and the homeless in Uganda.

Think about adopting or fostering

Here is some of Agnes’s story in her own words:

I grew up just the same as every other little girl. My father was my first love, and my mother was my best friend and comforter. My grandparents spoiled me beyond belief, my cousins were my closest friends, and my aunt and uncle’s houses were my homes away from home. I loved playing dress up, picking flowers for my mom, and always ran into my parents’ arms when I scraped my knee. I laughed and smiled while I danced around with my parents and held their hands. I viewed the world in the state of wonder that can only be seen through the eyes of a child. But as the years went on and I grew, things got difficult between my parents.

One day everything changed for me, when at a young age I was placed in an orphanage simply because my mother couldn’t afford taking care of me and my brother. Since I was the oldest, I was put in the orphanage first and my mother, who was now a single mother, thought that maybe she could afford taking care of just one child. She had had me at the age of sixteen and our father was an alcoholic and he abused her every time he drank so she decided to leave him and raise us by herself.

When I was sent to the orphanage, maybe at the age of eight, I was separated from my brother. It was like I lost everything and I was left all alone. I didn’t get a chance to say goodbye to my little brother. I didn’t know when I was going to see him again. That moment felt like my heart was torn into pieces. My whole family was gone and I was all alone.

During those years I spent at the orphanage, I felt abandoned and I asked myself a lot whether my birth mother even loved me. She had promised to come back and visit but she never did and that made me question myself whether I was good enough or not. I didn’t only feel abandoned, I felt so much guilt as well, and I said to myself that maybe if I was a better child my family would have stayed the same. The guilt killed me, especially since I didn’t do anything to stop my father from leaving. And I still carry that guilt to this day.

I have learned so much from my whole entire life experience and I know that there are still children out there that still go through the same things. That’s why God gave me a great vision to create my own ministry. At the age of 18, I decided to give back to the community of my birth and to create Jeremiah 29:11 Ministries. I chose this scripture to let the children know that God has a plan for them, that they should not lose hope.  Each year I take a trip back home and I visit the orphanages and donate medical supplies, clothes, hygiene supplies as well as shoes. I do this because I know what it’s like to lack. I fundraise everything on my own by working over the summer and also through fundraising online. I know what I have and it gives me great happiness to be able to give back to other children, even giving them something small like a bandage or a hug.  When you have not had these things, you understand what they can mean to a child.

I want to encourage anyone going through a rough time that there is still hope and God still loves you.  Don’t ever give up hope and stay in prayer.  To the adopting families, thanks for being angels.  And thanks for thinking of us and saving lives.